Sister Janet Wright, OP, a Dominican Sister from Adrian, Michigan, teaches watercolor and drawing at Mercy Center in Farmington Hills. She did post-graduate work in painting at Wayne State University and is known for her beautiful watercolors, using motifs from nature. She also created illustrations in the Dust of a Distance Star poetry book by Jean Denomme.

At this award ceremony, Sister Barbara Schwarz, OP (Amityville), President of the DIA, said that Sister Janet’s paintings “reflect the voice of God found in nature. Painting is her passion, and spirituality is very much woven into her art.” Sister Janet’s paintings can be seen throughout the Adrian Dominican Motherhouse, and one of her paintings, of corn, adorns the second volume of Adrian Dominican history.

Sister Janet’s artwork is available at the Weber Art Shop in Adrian, Michigan. 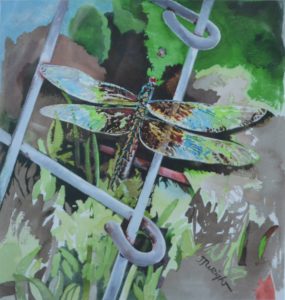 Prints of Sister Janet’s artwork are available for $35. The original watercolor work “Orchid” is available framed and matted for $300.