“The only truly brilliant thing I have ever done was to enter the Dominican Order,” said Sister Mary Jean Dorcy, OP, according to CatholicAuthors.com.

Sister Mary Jean Dorcy, OP, was born in 1914, and in 1934 became a Dominican Sister of Edmonds, Washington. From a single sheet of paper, Sister Mary Jean started cutting continuous flowing silhouettes. By the 1940s, she was recognized as one of the leading American paper cut artists. She has created many different patterns and images, all intricately cut with a simple pair of scissors.

Sister Mary Jean gained a deserved reputation as both a published author and artist. Her beautiful silhouettes have been used in her own books and have been reproduced on magazine covers, serigraphs, prints, Christmas cards, and even on church walls.

Sister Mary Jean claimed that her imagination came from her father and his wonderful heritage of Irish fantasy, and that her technical skills came from her mother, who had incredibly skillful hands.

“It makes me very happy to know that my silhouettes are hanging on the walls of a convent near the South Pole and in a rectory in Denmark and in Bankok and Ireland,” said Sister Mary Jean, according to CatholicAuthors.com. Sister Mary Jean died in 1988, but her artwork has inspired many other artists, including Dan Paulos, who collaborated with Sister Mary Jean on her last book, “Spring Comes to the Hill Country” (1989).

Weber Center Shop is one of the few retail outlets in the world that carries the artwork of Sister Mary Jean. Her art is available on cards, prints, and serigraphs, available for purchase in person and online. 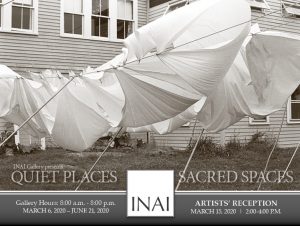