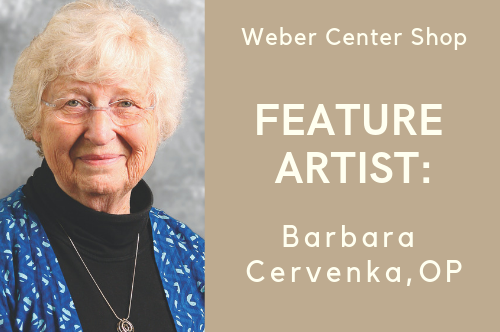 Barbara Cervenka, OP, an Adrian Dominican Sister, is a painter, primarily in watercolor, whose work has been exhibited around the country and abroad. For the past thirty years she has taught at the University of Michigan in Ann Arbor, Michigan, and at Siena Heights University in Adrian, Michigan. Recently a series of nine paintings by Sister Barbara was accepted into the permanent collection of the Detroit institute of Arts.

In 2000, she co-founded Con/Vida, a non-profit organization that helps foster cultural understanding through the promotion of the popular arts of Peru and Brazil. Currently Con/Vida is sponsoring an exhibition called “Bandits & Heroes, Poets & Saints” that is touring the U.S. through 2020.

As a member of the History Committee for the Leadership Conference of Women Religious, Sister Barbara helped organize the traveling exhibit “Women & Spirit: Catholic Sisters in America,” which toured nine venues across the country between 2009-2012.

To assist a Congregation of Dominican Sisters in Iraq who were forced to flee their convent and live as displaced persons for four years due to ISIS, Sister Barbara painted 1,000 origami cranes and offers a crane art piece to anyone who makes a donation of $100 to assist the Iraqi Sisters (www.1000CranesForIraq.org). You can see her crane art on exhibit at various galleries around the country – currently at the Alfons Gallery in Milwaukee – as well as at the Weber Center.

The Weber Center Shop currently has three original watercolor art pieces by Sister Barbara for sale, each matted and framed; they were clearly inspired by her visits to South America.