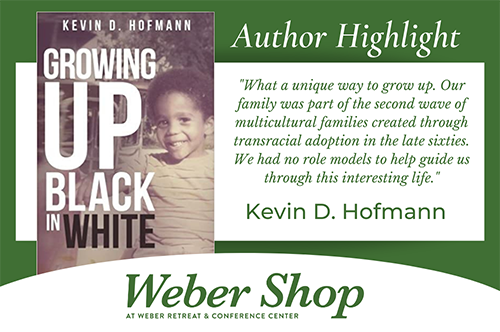 This month the Weber Shop is featuring the book Growing Up Black in White by Kevin D. Hofmann. Kevin was recently hired as the founding Director of Racial Equity and Cultural Inclusion for the Adrian Dominican Sisters. His book, published in 2010, chronicles his unique racial perspective.

Growing Up Black in White by Kevin D. Hofmann is a moving and sometimes humorous look into the life of one man with a fascinating past. Born into the racially-charged Detroit of 1967 to a white mother and a black father, the author was placed into foster care and then adopted by a white minister and his wife, the parents of three biological children. Hofmann’s memoir reveals the racial tensions, the difficulties of feeling neither black nor white, his family’s loving support, and his struggles to define and embrace his own identity as he grew to be a man. This is a story of hope and promise, and how we are able to define ourselves not through the racism and judgments of a challenging society, but through our own sense of self-respect and personal identity. Kevin Hofmann came to this memoir after a lifetime of contemplation and self-analysis. After attending a national conference on adoption, he found his voice and wove it into this emotional and often amusing story. Hofmann lives with his wife and two sons in Toledo, Ohio.

Copies of the paperback book are available for purchase at the Weber Center Shop for $23; visit the shop in person or call/email to order your copy of Growing Up Black in White.

Kevin regularly contributes to the blog on the Congregation’s Equity and Inclusion page.